Week 16 in the Year of Drinking Adventurously!  Pruno.

Yes, this week was supposed to be about pruno –essentially prison hooch– an alcoholic beverage made from whatever sugary stuff the prisoners could manage to get their hands on.  It never really, uh, caught on outside the walls of the penitentiary.  Which is the perfect opportunity for nerd girl here, to tie this post into Star Trek!  Bear with me!

So remember in Star Trek the Undiscovered Country how Captain Kirk and the crew of the Enterprise hosted the Klingon delegation for negotiations between The Federation and the Klingon Empire?

And the Klingon Chancellor gets assassinated, presumably by members of the Enterprise crew?  And all this after a night of drinking Romulan Ale?

Which leaves our intrepid captain and the ship’s chief medical officer Dr. Leonard McCoy to take the blame.  After a sham of a trial in a Klingon courtroom, the pair is sentenced to hard labor in the mines of Rura Penthe, a frozen planetoid/prison colony.  And THAT, my dear friends, is the tenuous connection to pruno! 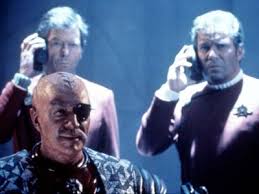 But here’s the good news!  Buried in this nonsense is Dr. Meg’s recipe for Romulan Ale.  And just like the version in the Star Trek universe, this stuff will knock you on your ass!  Be forewarned!

In a shaker with ice:

1 shot spiced rum (like Captain Morgan)
1 shot Everclear (you heard me… grain alcohol, or if that’s too scary, use vodka instead)
1 shot blue curacao
Shake and serve in nifty cordial glasses!

For the faint of heart, dilute with lemon lime soda and serve on the rocks!

Maybe Lula managed to get herself arrested this week.  Let’s go bail her out!

42 thoughts on “Romulan Ale will land you in jail!”