The royal houses of Europe have always been a bit of an incestuous bunch —at least until recently when standards have been relaxed. For those of royal blood, their selection of future mates was largely arranged so as to form or strengthen political alliances. As a result, the pool of choices was very limited and the families of Europe (including Russia up through the 19th century) became a confusingly intermarried bunch.

Three of the principal combatants during the First World War –Britain, Germany and Russia– were ruled by men whose close family ties were unable to prevent that dreadful conflict. King George V of Great Britain, Tsar Nicholas II of Russia and Kaiser Wilhelm II of Germany were first cousins. Here’s how they were related:

King George V was the son of King Edward VII and his wife Alexandra of Denmark.

Tsar Nicholas II was the son of Tsar Alexander III and his wife Dagmar of Denmark (Alexandra’s sister).

Kaiser Wilhelm II was the son of Kaiser Friedrich III and his wife Victoria of Great Britain (Edward’s sister).

Additionally, Tsar Nicholas II and Kaiser Wilhelm II were related further back in the family tree through the marriages of the tsar’s distant cousin (the granddaughter of Nicholas’ great grandfather —I’m not sure what that relationship works out to be…) to Wilhelm I, King of Prussia (Wilhelm II’s grandfather).

AND, Tsar Nicholas II married Alexandra of Hess-Darmstadt —daughter of Alice of Great Britain, sister of Edward VII, making him cousin by marriage as well.

Despite these close familial relationships, in 1914 the monarchs found themselves at war in the worst conflict the world had ever seen up to that time. By the end of The Great War, two of those monarchies had been brought to their end —the Russian through revolution and the German through defeat. Tsar Nicholas II and his family were executed on July 17, 1918 by the revolutionary Bolsheviks who had been holding the Romanovs captive after Nicholas’ abdication of the throne. The kaiser was forced to abdicate the Imperial German Crown and the Prussian Kingship on November 9, 1918 as the German army was near collapse and revolution loomed on the home front. Wilhelm fled by train to the neutral Netherlands where he lived out his life in exile. 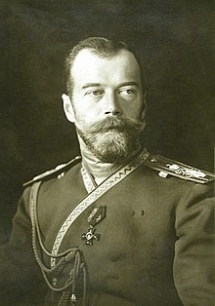 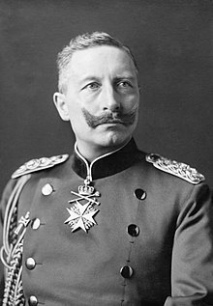