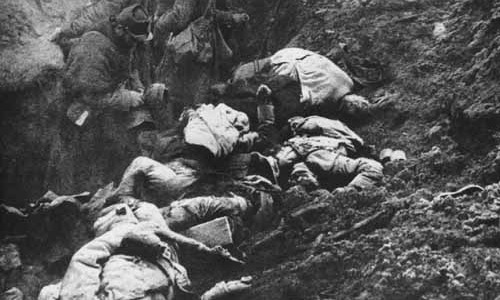 His sky blue uniform slick with blood and Flanders mud, he fell back into the trench and gasped, “Maman, je meurs.”

More of my research on World War One – by Meg Sorick

“Wisdom is an arrow seldom used in the quiver of government.” -Historian Barbara Tuchman

The First World War was a ‘total’ war in the sense that the civilian populations and the entire economies of the warring nations were fully mobilized to support the effort. No longer was the conflict limited to fighting between professional armies. Rather an entire generation of young men was conscripted to join the decimated troops on the frontline. It was a war of attrition, slow and deadly. The armies dug in and slaughtered each other with little ground gained or goals achieved. The Battle of the Somme in 1916 is an example.

The battle, an offensive staged by a combined British and French force, began in July and lasted five months.  On the first day alone, the British lost 57,000 men. When all was said and done, the British and French had advanced about 6 miles (9.7 km) on the Somme, on a front of 16 miles (26 km) at a cost of 419,654 British and 202,567 French casualties, against 465,181 German casualties. Lloyd George called it, “the most gigantic, tenacious, grim, futile and bloody fights ever waged in the history of the war.”

And so it was until it was supplanted by an even more horrific battle the following year. In July of 1917 the assault began on the village of Passchendale in the Ypres Salient. General Douglas Haig, commander of the British Expeditionary Force (BEF) was confident he could take the village in a matter of hours by simultaneously attacking German positions. But the reality of the situation was that rains had turned Flanders into a muddy mire and thousands of men were quickly bogged down. They became sitting ducks for the German guns and died from a combination of wounds and the diseases that festered in the muck they were forced to fight and live in. At the end, Canadian forces eventually prevailed but at the cost of a quarter million British soldiers. And for what? No German communication lines had been cut and the army’s morale was in tatters.