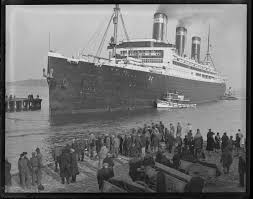 I’m researching The Great War for my current work in progress: a historical novel set partially during that time. To write the period accurately, I’ve been reading and studying the war and the surrounding events. Some of the older material I’m reposting in order to better organize it. I wrote this post in 2016 during my Spanish Flu research. The epidemic will play a central role in the historical timeline. I hope you find it interesting and don’t mind me recycling! ~ Meg

The early 1900’s and 1910’s saw the launch of many famous super liners –ships designed to carry thousands of passengers across the Atlantic Ocean from Europe to the Americas in  luxury and comfort. These were famous liners like White Star Lines’ Titanic and her sister ships Olympic and Britannic, Cunard’s Lusitania and Mauritania, and even larger –Hamburg-America’s Imperator, Vaterland and Bismarck. The Bismarck* would hold the title of largest ship in the world until 1935.

The three German ships had the ill fortune of being launched just prior to the outbreak of World War I and thus spent little time in the service of Hamburg-America before being laid up in port thanks to British domination of the seas.

It was late July 1914, when the SS Vaterland made her crossing to New York City, USA. When the guns of August began to fire, the return trip was determined to be unsafe, she was laid up at her Hoboken, New Jersey terminal and remained there for nearly three years.

In 1917, when the United States entered the Great War, the Vaterland was seized and rechristened as the SS Leviathan by President Woodrow Wilson. She would now be put into service transporting fresh American troops to the port of Brest in France to bolster the exhausted French and British forces.

By late September 1918, the second wave of the epidemic flu was beginning to spread through the troops destined for the front. The giant transport ships, with their confined decks and crowded bunks provided the ideal conditions for incubation of the virus. Circumstances aboard the massive troop ship Leviathan proved to be the worst of all.

On September 29, 1918, SS Leviathan left New York harbor for Brest, carrying 9,000 troops and 2,000 crew on board. By the following morning, the sick bay was overwhelmed with men suffering from the symptoms of flu. It took just three days for 700 more men to sicken and for one of them to die. Bunks were turned into makeshift sick beds. Healthy men were confined to less well ventilated quarters and the disease roared through the ship like a wildfire.

On the fourth day, October 1st, 2000 men had fallen victim to the dreadful disease. The official Navy report states that ‘pools of blood from severe nasal hemorrhages were scattered throughout the compartments, and the attendants were powerless to escape tracking through the mess, because of the narrow passages between the bunks.’

The ship docked in Brest on October 8, 1918 with 2000 men sick with flu and pneumonia, 80 had died and been buried at sea and those left healthy were desperate to get off the plague ship. Nevertheless, 280 of the ill men were too weak to get off the ship and 14 more died before the end of the day. Some 1000 of the remaining patients had to be carried via stretcher to the base camp from the wharf in a convoy that stretched four miles. The American influenza casualties eventually reached into the hundreds.

One interesting side note regarding Leviathan: her crew included Chief Quartermaster, Humphrey Bogart, future American film star. As the senior enlisted man in the Navigation Division, Bogart would have been on the helm whenever the ship sailed in or out of harbor.

*This ship is not to be confused with the battleship Bismarck, commissioned by the Nazis in World War Two. This Bismarck was a passenger ship, was never actually launched before the outbreak of the war and later was handed over to the Allies as war reparations and rechristened as the HMS Majestic of the White Star Line.