Week three and I’m already sort of going off script. Pierogi are not baked but they are made of dough so…. And I have a good reason for featuring them this week: Pittsburgh. (And don’t be confused, I am from Philadelphia, not Pittsburgh.) For those of you outside the United States and those who pay zero attention to sports, here’s the connection: I am a Pittsburgh Steelers football fan. (Steelers fan in Eagles territory…) The Steelers are in the playoffs. This Sunday they played and won their game against the Kansas City Chiefs in what can only be described as an ugly win. Nevertheless, the playoffs demand a party and a party demands food and drink.

Any city like Pittsburgh with a vibrant Polish and Eastern European community, will certainly be known for the foods of that ethnic origin–pierogi, for example. Pierogi are pockets of dough filled with a variety of ingredients. A traditional pierogi is most often filled with a combination of potatoes and cheese, potatoes and onions or cabbage. In honor of the Steelers, my friend Alexandra, armed with her Ukrainian grandma’s recipe, agreed to show us how to make pierogi from scratch on Sunday afternoon. I feel an annual tradition starting…

Now, right at the beginning I have to warn you, this was neither quick nor easy but it was so totally worth it. The key to this entire process as you might imagine is the dough:

Scald milk in saucepan. Put butter in hot milk to melt. Allow to cool for a few minutes. Mix water and yeast in a separate bowl. Let rest 5 minutes. Add salt and egg to milk mixture. Combine thoroughly. Gradually add flour in with mixer. As dough thickens, knead by hand instead (or switch to dough hook if using a stand mixer). Cover bowl with cloth and allow dough to rise about an hour.

Then the dough gets rolled out to about an eighth inch thickness and cut into rounds: 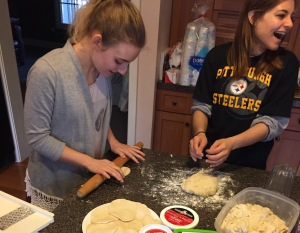 When the rounds are ready, it’s time to fill them. Ours were stuffed with mashed Yukon gold potatoes, cheddar cheese, green onion and bacon. Fold the round over the stuffing mixture, seal with egg wash and use the tines of a fork to crimp the edges.

The filled pierogi go into a pot of boiling, salted water for a few minutes and then into a pan for frying in butter to a light golden brown.

And no Ukrainian or Polish meal would be complete without kielbasa,

And did I mention the Steelers won? Yeah, that too!

There is no more appropriate bread to open this series with than the baguette. The most basic of breads, the simplest of ingredients and yet the most wonderful results. The composition of a traditional baguette is nothing more than flour, salt, yeast and water. You need no complicated tools, this can all be done by hand. Though it takes time to get from start to finish, most of that time is spent waiting for the rise. The actual working time is quite short. Here’s what you do:

We begin with a “starter” – a water/flour/yeast mixture that gives the yeast a head start in the consumption of the carbohydrates in the flour. The byproduct of ‘yeast eating sugar’ is CO2 and that is what makes bread rise.

Combine in a large bowl, cover and let rise 2-3 hours, until it gets bubbly.

When the starter has done its thing…

Add in:
1 tsp yeast
2 additional cups of flour
1 1/2 tsp salt
Enough water to make a smooth dough (usually not more than another 1/4 cup)

Hand form dough into a smooth ball. (Or you can use a stand mixer with a dough hook) Place dough ball in a bowl dusted with flour, dust top with flour. Cover bowl with a kitchen towel. Let rise 40 minutes or until doubled in size.

When doubled, cut dough in half, keeping as much air in the dough as possible. Fold and roll dough pieces into 2 baguettes. Place on floured baking sheet*, cover and let rise an hour.

Heat oven to 425. Just before placing baguettes into the oven, slash the tops of the loaves diagonally several times. Spritz with water to make the loaves nice and crusty. Bake 20-25 minutes, until golden brown.

*I actually use a baguette pan. I have a similar one for Italian loaves. These aren’t necessary but they do help make more uniform loaves. I hope these turn out for you if you try them. They are the perfect accompaniment to a hearty soup or stew. Bon appetit!

“How can a nation be called great if its bread tastes like kleenex?” Julia Child

Let’s forget about calories, carbohydrates and gluten* for just a moment shall we? Bread is the stuff of life. There is nothing like the aroma of warm loaves fresh from the oven. Cut a slice of that crisp crust and smear it with butter, let it drip down your fingers as it melts and savor … Accompanying hot soup on a cold day, with aged cheese and good olives for an hors d’oeuvre, good bread is one of life’s small pleasures.

Like my character Maya, in Breaking Bread, I love to bake. And even more than sweets, I love to bake bread. I fantasize about living in Paris in an apartment over un boulangerie, waking every morning to the smells of bread and strong coffee…. and in an effort to bring that fantasy as close as I can to reality (at least until I figure out a good plan to fake my own death, collect on the insurance and make my escape…) I have been baking my own bread for the last … well, a long time.

Some of my favorites: A simple baguette – water, salt, flour and yeast. A brioche – sweet and rich with eggs and sugar. Challah – braided and risen in a pretty pattern. And a simple maple buttermilk bread, perfect for toast in the morning. Oh, and home made deep dish pizza… 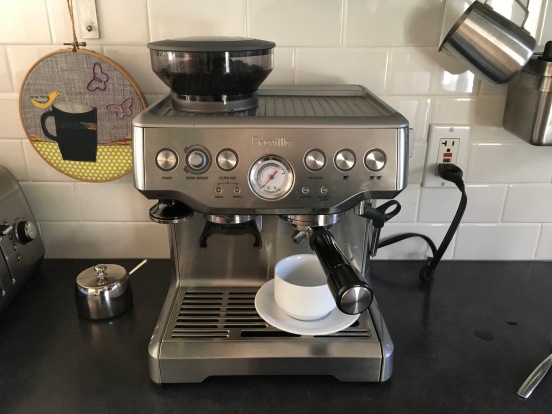