Following the chart to 52 drawings this year.

I am a huge Godzilla fan, especially the original Japanese films with subtitles (or bad overdubbing). So much fun! I am pretty pleased with the recent film version from 2014 and am looking forward to the next installment. So in honor of the King of the Monsters, here is my Gojira/Godzilla: 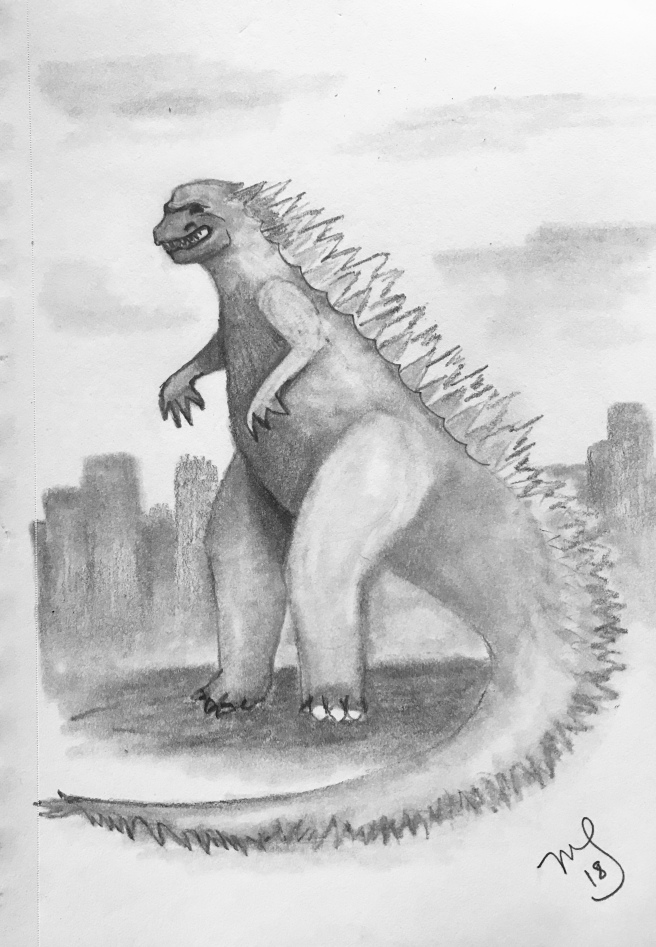 For those of you just joining this blog, Godzilla makes regular appearances.  Because he is awesome.  With all these limericks to write this month, don’t be surprised if he shows up again!  And for your listening pleasure, “Godzilla” by Blue Oyster Cult.

Week 4 of the year of drinking adventurously!  And it’s a fail!

I tried, I really did.  I knew the storm was coming.  Rather than wait till the last minute, I started looking last week for the Japanese whiskey that was to be this week’s offering.  According to Jeff’s book, Japanese whiskey rivals the best products of Scotland and Ireland.  Who knew? I live in the suburbs of a major East Coast city so I figured one of the larger liquor stores would stock at least one or two varieties on their shelves.  Nope.  I searched for it online.  The closest liquor store to carry it is in East Brunswick, New Jersey; a trafficky hour and a half away.  I couldn’t even find it on the menu of any of the local Japanese restaurants.  I will have to refer you to Lula’s blog to see how she liked it.

Now, you would think I’d take advantage of this enforced downtime to write, edit, research or something.  But you would be wrong!  We brewed our own beer!  You knew I’d get around to alcohol at some point, right?  Rather than bore you with the details (and I intended to bore you with the details but I bored myself just writing them, so…), I will just say that when this batch is finished fermenting, we will hopefully, have an English Ale.  And because this week’s adventure should have taken me to Japan, home of the legendary and awesome radioactive monster, Gojira (Godzilla), I thought it would be the perfect day for a Godzilla movie marathon!  That didn’t happen either, my husband can’t sit through them.  Although to be fair, that might have something to do with the fact that I own the boxed set of the original Toho Productions movies, in Japanese with subtitles! (I could bore you with those details, too.)

Nevertheless, sometimes marriage is about compromise and in order to satisfy my desire for giant alien monsters, he agreed to watch Pacific Rim, which I found on TV.  It really doesn’t take much to make me happy!

Anyway, sorry to fail on week 4.  I am slightly more  optimistic about next week, however. The drink of choice is from China.  Philadelphia does have a Chinatown …  Anyone up for a night on the town?