Another of the British War poets I discovered in my research of The Great War for my novel in progress, is Edmund Blunden. The poem I’ve included at the conclusion was inspired by his experience at the Somme in 1916.

The first large offensive of the Battle of the Somme was the offensive at Thiepval Ridge. Mounted by the Reserve Army commanded by Lieutenant General Hubert Gough, the attack was intended to benefit from the attack of the Fourth Army at the Battle of Morval which was planned for twenty four hours later.

However, Thiepval Ridge was a well fortified entrenchment. The German defenders fought doggedly while the British advance bogged down after the first day. The coordination between infantry and artillery declined thanks to the chaos of the maze-like trench system, the dug-outs and shell craters. The British objectives were not actually achieved until October-November when the Reserve Army was reorganized and reinforced at the Battle of Ancre Heights. 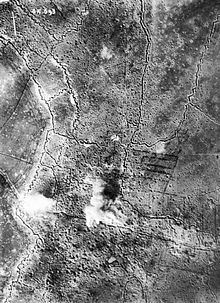 Beyond the organizational turmoil, the deteriorating weather frustrated the plans of General Joffre to forge ahead with the planned attacks of the Anglo-French armies. Coincidentally, the Allies’ failures were further hampered by a revival in the German defense. It was time for experimentation in the war’s cruelest and deadliest weapons. The British implemented new techniques in gas warfare, machine gun bombardment and tank/infantry cooperation. The Germans struggled to withstand the ascendancy of men and material fielded by the combined British and French forces, even though they were being reinforced by troops, artillery and aircraft from Verdun. September became the costliest month for German casualties in the Battle of the Somme.

The tired air groans as the heavies swing over, the river-hollows boom;
The shell-fountains leap from the swamps, and with wild-fire and fume
The shoulder of the chalk down convulses.
Then jabbering echoes stampede in the slatting wood,
Ember-black the gibbet trees like bones or thorns protrude
From the poisonous smoke — past all impulses.
To them these silvery dews can never again be dear,
Nor the blue javelin-flame of thunderous noons strike fear.